Foldable phones are quite expensive and Samsung has been making these devices for quite some time now. Samsung’s Galaxy Z Fold family foldable phones have become quite popular too. But now, a patent has reportedly been granted to Samsung that reveals that the company might be developing its next foldable phones with special attention to health. The next foldable devices from the South Korean giant might include health monitoring hardware.

According to the patent revealed by LetsGoDigital, Samsung could be adding health monitoring hardware to its future foldable devices. The report reveals that there will be new sensors in the upcoming Samsung foldable that will be able to monitor user’s blood pressure through the phone. The patent also shows an inward folding design which is similar to the one of the Galaxy Z Fold 2 and the Galaxy Z Flip. Here’s what the patent reveals about the health monitoring features that could be coming to the future Samsung foldable devices. 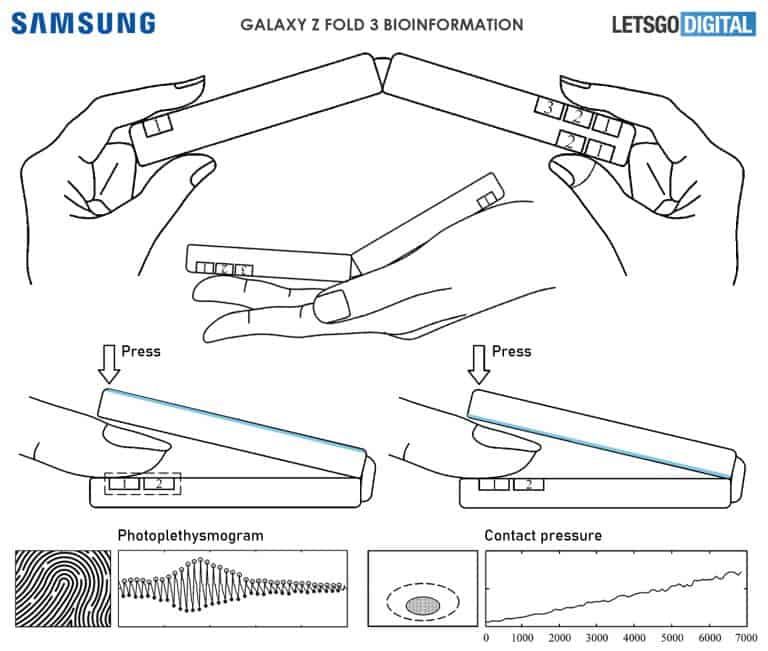 According to the pictures from the patent, there will be two ways to measure your health status. The first method would require you to stick your finger between the two parts of the folding screen when closed. After this, the onboard sensors will measure things like your heart rate and blood pressure. As per the patent, this technology will use two measuring sensors and could be used on one of the next generations of Galaxy Z Fold devices.

The second method, on the other hand, will require you to hold a clamshell-type of phone opened in your palm. This is expected to be included in some future Galaxy Z Flip-like foldable smartphones. In this technology, the handset will have its sensors on the back, and as per the patent, it will use a total of four measuring sensors. To measure your vitals, you would need to put one end of the phone on your palm and the other at your finger.

However, it should be noted that this is just a patent and it needs to be seen whether this tech actually makes it to the actual device. But if it arrives early, we could see these new sensors on the Galaxy Z Fold 3 and the Galaxy Z Flip 3.